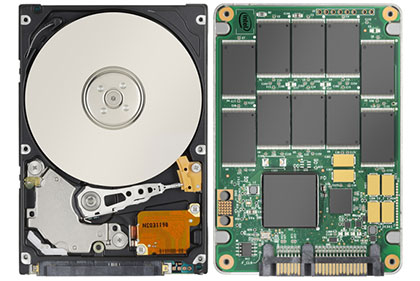 Hard disk drives have been around for more than 50 years, steadily increasing their storage capacity and decreasing their physical size. HDDs rely on spinning disks, or platters, to read and write data.

If you have to pick just one, though, how do you choose? Let’s get into the differences between SSDs and HDDs, and walk you through the advantages and disadvantages of each to help you decide.

If you have a desktop PC it will most likely have a traditional hard disk drive, on which the operating system, along with any applications you install, and your files and folders, are stored.

A traditional hard drive contains a circular disc – known as a platter – that stores your data. The disc spins, allowing the read-write arm to read data on the disc (or write data to it) as it passes.The faster the platter spins, the faster the hard drive works, which can impact how quickly your operating system responds, and how long it takes applications installed on the drive to load and open.

A hard disk drive or HDD is cheaper and offers more storage (500 GB to 1 TB are common).

Start-up speed is slower for HDDs than SSDs because a spin-up for the disk is needed. Intel claims their SSD is 8 times faster than an HDD, thereby offering faster boot up times.

Solid state drives are a newer technology, but have progressed rapidly, adding more storage capacity each year. SSDs rely on electronic storage in non-volatile memory, meaning that data won’t disappear when the computer is turned off.

Each time you ask your computer to retrieve or update data, the SSD controller looks at the address of the data requested and reads the charge status.

SSDs are newer technology, and as such, are more expensive than HDDs. Although they are catching up, it can be harder to find very large-capacity solid state drives. HDDs can be as much as 2.5 times larger.

Solid state drives deliver faster load times for games, applications, and movies. Because of the technology they use, SSDs are lighter and more able to withstand being moved and dropped. In addition, solid state drives use less energy, keeping the computer they’re used in cooler.

Conclusion : When it comes to choosing between SSD or HDD storage, SSDs would be preferably to HDDs in all cases if it weren’t for one fact: SSDs are more expensive than HDDs when measured by cost per Gigabyte of storage.