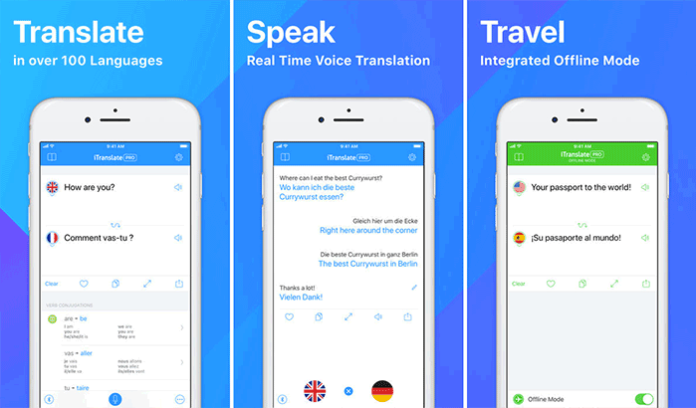 Google Translate is one of the best-known translators due to its versatility and simplicity. And you can access even more features in Google Translate’s mobile app. The service supports over 100 languages for translations of typed or handwritten text.

Don’t forget about offline mode in case you’re in an area without internet. You still can translate 59 languages when you’re away from Wi-Fi.

Microsoft Translator is another big name in translation apps and offers an even simpler interface than Google Translate. Four big bubbles float on the home screen of the app. Their functions are pretty self-explanatory: voice translation, conversation translation, photo translation, and text translation.

Reverso is definitely limited when it comes to supported languages (it only works with 11), but it provides more detailed translation information than other apps.

Choose a language and type a word into the search bar. On the results page, the app presents alternatives to that word in whichever language you choose. It provides several definitions that show how to use the word in different contexts as well.

When you open Papago, you’ll notice an area to type the text you want to translate, along with three colorful bars that represent your translation options. It supports 13 languages that you can translate via text, voice, and photo.

Select Papago Mini, and you can access the translator while you surf the web. A tiny box along with a parrot icon will appear in the corner of your browser. Simply copy a chunk of text from a website, and you’ll receive a complete translation.

SayHi is made specifically for translating speech and text, which means it’s a bit limited in other features. However, it does support a variety of languages and a large number of Spanish dialects.

You probably used Dictionary Linguee in your high school language class (I know I did). It’s a reliable translation tool that puts foreign words into context. The app supports several languages and allows you to conduct bidirectional searches. This means that you can search for translations in both English to Chinese or Chinese to English (for example).

As soon as you type a word into the search bar, Dictionary Linguee presents you with a definition. This comes from its editorial dictionary assembled by a team of lexicographers, so you know you can trust it.

It’s not fun to watch a movie entirely in English when you’re still learning the language. TheaterEars is for native Spanish speakers who want to want to experience the thrill of watching a movie in theaters. However, it can also help those who are trying to brush up on their Spanish skills. Your friends might think that streaming audio during a movie is an unusual way to learn a language, but it’s actually quite beneficial.

t’s common to feel like an outcast in foreign countries when you don’t know the slang. TripLingo solves this issue by providing translations in different formality levels: formal, casual, slang, and crazy. Choose from a series of preset phrases, and learn the different ways you can say each one.

This app offers more than 50 languages for translation.

It can translate from speech to text as well as from text to speech, so it’s very versatile. It’s a no-frills, get-the-job-done app, a workhorse to deliver what’s needed right on the spot!