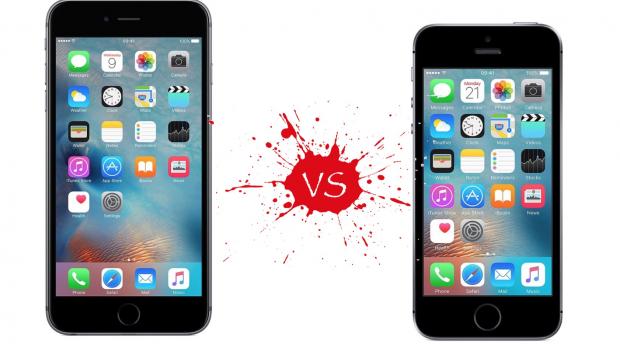 Here are the specs for the iPhone 6s:

And here’s the specs for the iPhone SE:

Technically, from a resolution perspective, the iPhone 6s wins because it has a higher resolution. Although that resolution is obviously larger because the screen is larger. But the 6s wins on another front. Its display has both dual-domain pixels for wider viewing angles and a 1400 to 1 contrast ratio, as well as 3D Touch.

The contrast ratio of the SE is only 800 to 1 and that means the bigger iPhone’s display can display more difference between the brightest whites and the darkest blacks.

As for the design, both feature aluminum bodies and while their physical length and height dimensions are of course different (due to screen size) the larger iPhone 6s wins on thinness being just 7.1mm thick versus the iPhone SE’s 7.6mm thickness.

In the storage department, the iPhone 6s wins because it comes in a 128GB option in addition to the 16 and 64GB options found on the iPhone SE. And while both phones have the Touch ID fingerprint sensor and support Apple Pay, the iPhone 6s used a second generation Touch ID, which is about 2x faster than the first generation Touch ID found on the SE. Both phones feature the exact same A9 chip with M9 motion coprocessor.

As for battery life, although the iPhone 6s features a slightly larger battery at 1715 mAh, it doesn’t get any more usage than the 1642 mAh battery provides the SE. Each phone will last about 12 hours in mixed usage. The lack of battery life discrepancy is due to the fact that the larger 6s battery needs to power a larger display.

If you want an iPhone but are operating on a budget or don’t want to be locked down inside a length contract.

iPhone 6s vs iPhone SE – An Overview of The Phones

Needless to say, at the same storage sizes, the iPhone SE is significantly cheaper than the iPhone 6s. However, the iPhone 6s has the larger display, the better Touch ID, and the better front-facing camera. That being said, your choice will probably come down to what size phone you want. Do you want the small 4-incher or the slightly bigger 4.7-inch?

Every now and then Apple does something which, for a company that is usually predictable like clockwork, is distinctly out of left field.

Things like launching the Apple Watch, the iPad Pro, and the way it has occasionally launched smaller, slightly cheaper iPhone models such as the iPhone 5c and iPhone SE.

In these cases, not only does Apple introduce some slightly peculiar product category or an odd take on an existing product in its portfolio, but it often launches them at weird times of the year. For most of Apple’s product line-up, September is the time to watch, but the oddballs seem to get scattered throughout the year like confetti.

In 2016, on March 21, Apple launched the iPhone SE. It wasn’t entirely a surprise, as there had been rumors and leaks, but none of it had felt as concrete as what we associate with the Autumnal launches of its main products.

This Spring launch only saw a single device, but it was intended for a specific market segment and is very different from its stablemates.

As of right now, the iPhone SE is the ONLY iPhone you can buy with a 4in display. The iPhone 8 was the last iPhone to carry the home button. Both, in this respect, are now relics of a passing era.

All new iPhones use FACE ID, do not have a home button, and are much larger than 4inches.

For this reason, if you want a smaller iPhone, your best bet is one of these devices. The upshot of going with one of these models – or the iPhone 7 or iPhone 8 – is that they are now pretty cheap.