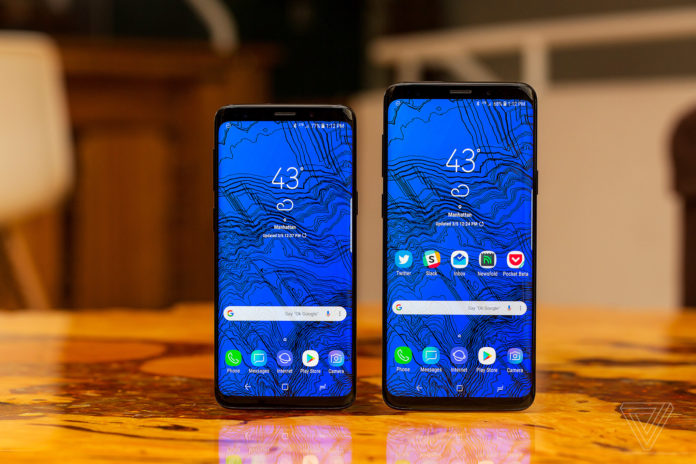 From a purely aesthetic standpoint, the Galaxy S9 and Galaxy S9 Plus are near-identical.

They share the same design language, with rounded edges and a fusion of metal and glass.

The basic design is largely the same as that seen on last year’s S8, which is no bad thing – although those expecting a major facelift will be disappointed.

Samsung has fallen into the same two-year cycle as Apple when it comes to its smartphone designs, it would seem.

It’s only when you set the S9 and S9 Plus side-by-side that the disparity in size becomes apparent.

On its own, the S9 Plus doesn’t feel overly large, like some phablets; that roomy 6.2-inch screen has tiny bezels which give an impressive screen-to-body ratio.

The Samsung Galaxy S9 gets a 12-megapixel rear camera with an aperture of f/1.5 – the brightest ever on a smartphone – which is a huge 28% brighter than the primary camera on last year’s S8. Woosh.

At the launch, Samsung demonstrated this by pointing the phone at a box full of flowers lit at a lower light intensity than 1 lux (0.87 to be precise) and comparing the results with those achieved by a Google Pixel 2 XL. Unsurprisingly, given that this was set up to make the S9 look good, the results were impressive, with the flowers looking very dark in the Pixel image but clearly distinguishable on the S9. The noise levels and colour retention were good, too.

Inevitably, the Samsung Galaxy S9 is quicker than the S8 and this is courtesy of its faster Exynos 9810 processor. This is an octa-core chip, built on a 10nm process in the same forge as the new Qualcomm Snapdragon 845 (only in the US does the Galaxy S9 run an 845) and this comprises two quad-core CPUs, one running at 2.9GHz, the other “low-power” core running at 1.9GHz. This is backed up by 4GB of RAM and 64GB of storage.

Just like the Samsung Galaxy S9 Plus, this results in significantly quicker performance than last year. See the graphs below. Note, the graphics-based GFXBench tests were run at native resolution. The phone can get higher benchmark results if you leave the screen resolution at the default FHD+ setting (1,080 x 2,220) or drop it to its lowest HD+ setting (720 x 1,480).

There are a couple of minor improvements to Samsung’s DeX system, too. First introduced on the Galaxy S8, DeX allows the phone to be plugged into a dock and display a desktop operating system on a connected monitor.

Elsewhere, Samsung has improved the Samsung Galaxy S9’s iris and facial recognition systems. On their own, these two aren’t all that exciting. The Galaxy S8 and S8 Plus introduced these biometric login techniques last year but in the Samsung Galaxy S9, however, they’ve been combined together and given a name change.