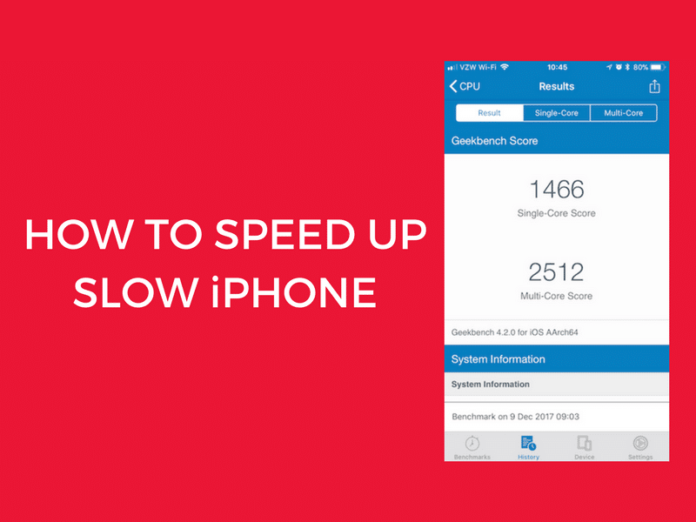 It’s a common worry… particularly after updating iOS, or when a new phone has just appeared on the market.

Old iPhones become more prone to speed problems as they age, but even newer handsets may slow down if you haven’t got a lot of space free.

Check whether your iPhone is up to date by heading to Settings > General > Software update. updating will grab the latest patches and fixes for known problems.

let’s restart the iPhone completely. Press and hold the Sleep button (the one on the top right of the iPhone on iPhone 5s and earlier, or on the right edge on iPhone 6 and later) until the Power Off slider appears. Swipe it and wait for the iPhone to power down.

Once it’s finished (it’ll take about 10 seconds or so), start the iPhone up again by pressing and holding the Sleep button for about 5 seconds. You’ll see the Apple icon, then the iPhone will restart.

If you’re running out of space on your iPhone this could account for the sluggishness. One quick way to free up a chunk of space is to delete a few apps.

Identify which apps are taking the most space by going to Settings > General > Storage & iCloud Usage and then tapping ‘Manage Storage’ under Storage.

You’ll now see a list of apps and how much space they’re taking up on your phone. You can easily delete apps you don’t need here by tapping on the app name, and choosing Delete App on the next screen.

Open the Settings app and scroll down to Safari. Here you can choose ‘Clear History and Website Data’.Safari will forget the URLs you’ve been visiting so won’t suggest them as you type, unless they’re bookmarked.

Getting rid of automated features will help keep your iPhone running faster, and help extend your battery life as well. The following feature was added way back in iOS 7, so if you’ve got that or a later version, you can benefit from it.

6. Turn down the graphics

iOS 7 also introduced some fancy new visual effects, but dialling them down can help to improve performance.

This turns off the parallax effect of icons and alerts. Many people also find the phone easier to use in this setting.

A more drastic step than restarting the iPhone, a full reset takes longer but is a more effective way of solving problems with the way an iPhone is running.

Press and hold the Home and Sleep buttons at the same time. Keep holding them while the screen goes black (the red power-off slider may appear – if it does, just carry on holding the buttons), right up until the Apple logo appears. When that appears you can let go.

Finally, the most drastic step of all: we’re going to perform a full restore, which deletes all the data on the iPhone and returns it, in effect, to the state it was in when you bought it.

Since we’re deleting all the data, it’s vitally important that you back up the iPhone: either back up to iTunes by connecting the phone to a computer as above; or to iCloud, by opening the Settings app, then scrolling down to iCloud, then Storage & Backup, then Back Up Now in iOS 6 or turn on iCloud Backup in iOS 7 or later.

Now you can restore the iPhone to its factory settings by going to Settings, General, Reset, Erase All Content and Settings. You’ll then have to enter your passcode if you’ve got one, and then confirm that you want to delete all media and data, and reset all settings.

What To Do When You Get Your Phone Wet

How to fix a cell phone that says Emergency Calls Only