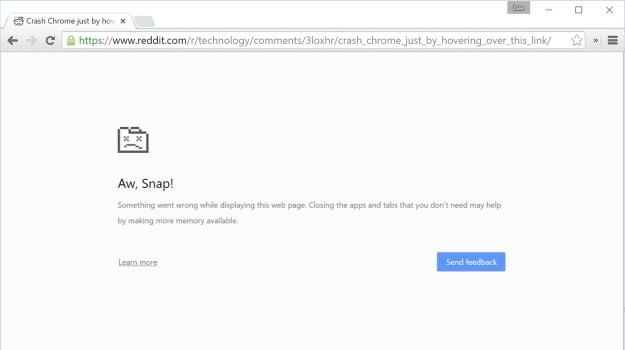 Google Chrome, like any other application on Windows, Linux and OSX, can crash. Unfortunately (for most), since it has many different ways in which it can become corrupted, it can be difficult to fix. This tutorial is going to give an overview of how to ensure it works correctly.

The main issue for Google Chrome is corrupt files & settings.

The problem with this application in particular is that since it is so extensible (has the ability to install plugins etc), it just takes a damaged / incompatible file in any part of the system to cause a fatal crash. On top of this, a variety of other potential problems – from having core issues with its system permissions – to being unable to load up various important settings, can cause the application to stop working.

The way to fix the errors it may have is to first ensure you’re able to clean out any of the potential issues the application may have, and then work with Windows to fix any potential problems it has also. The steps to achieve this are as follows…

The most common reason why Chrome crashes is because it has a series of issues with its integration with Windows.

As mentioned, it is highly extensible which means it has a large number files which all need to work correctly. If just one of these files becomes damaged, Chrome will stop working.

To resolve this, the most effective way to fix the error is to simple re-install Chrome. This not only replaces any potentially damaged files, but updates the various Windows settings that are often the silent cause of errors/crashes.

To do this, you need to follow the steps here:

Upon restart, your system will not have Chrome, so you’ll need to use Internet Explorer – or Edge if you’re using W10 – to download a new copy.

To do this, you should just load up the other browser, search for Google Chrome and let it download. Once downloaded, install it and then sign in with your Google account (if you have one).

Once you’ve signed in, all your old plugins / settings etc will load up. This should work, although if you have a faulty plugin, the crash may occur again.

If it does, you should continue to step 2.

Another problem with Chrome is that it will often have a large number of files which simply become missing in Windows.

These missing files are lost because of incompatibility problems with other applications in the system, from the likes of Photoshop to Visual Studio often causing problems.

If you’re experiencing crashes with Chrome, and especially if an error appears, you will likely need to replace a number of files which may be causing problems on your system.

To do this, you can follow the steps outlined here:

This process might seem a little far-fetched but it’s very important.

One of the major problems for Chrome is that your system will basically be unable to load particular files that are required to get it working. If this is the case, you need to ensure that your system has all the files necessary.

The next, and actually somewhat successful, step is to close any antivirus applications running on your system.

One of the most common causes of problems for Windows is over-zealous antivirus tools blocking access to other apps.This happens particularly badly with Chrome because it is constantly connected to the Internet.

To resolve this, you may wish to close any antivirus application that you have running on your PC. As a warning, this will leave your system temporarily exposed to viruses – but this should not be a problem for a short duration:

One the system has been paused, you should then try loading up Chrome.

If there are no errors, it means that your antivirus is conflicting with the system, and thus will be leading to a number of potential conflicts inside Windows. If it still crashes, it means your computer has a deeper problem with the app, and you should re-enable your antivirus using the steps above.

Finally, you should try restarting your system.

You’ll be surprised at how often you can fix computing problems through a simple restart. This not only shuts down Windows correctly, but also makes sure that any applications you’re running get the ability to start up correctly when the system boots again.

One of the main problems for Windows is that it is often the case that the longer the system is left running, the slower it becomes as it corrupts all its files. This is one of the major causes of problems for Chrome.

To resolve this, you should click onto the “Start” button your system, select “Power” and then “Restart”. This will shut down your PC and power it back up. If, after this, the crashing still occurs in Chrome, you’ll want to then try ensuring that your system is fully up to date and that you don’t have any conflicting applications causing Chrome to become damaged.